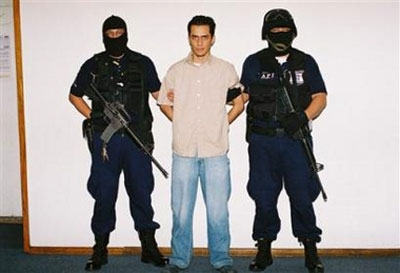 Police in Mexico City arrested Raul Osiel Marroquin yesterday, a serial killer who mad murdered at least four gay men by luring them from bars, some of whom he tortured before hanging them. In one instance, he carved a star into the victim’s forehead. Marroquin is a former soldier who at one point had also kidnapped two additional gay men, before ransoming them for $11,500.

Said the killer, as he was paraded in front of the media: “I snuffed out four homosexuals that in some way were affecting society.” Given the chance, Marroquin said he would kill again, but “refine his methods.”