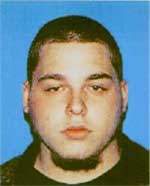 Police have identified 18-year-old Jacob D. Robida of New Bedford as the suspect in the shooting at Puzzles Lounge early this morning.

“Police said the man entered the bar, ordered a drink and asked the bartender if he was in a gay bar. When told that it was, he reached into his coat and pulled out a hatchet and attacked the man next to him. As patrons attempted to restrain him, he drew a gun and fired several shots, wounding two people, police said. Two of the wounded were airlifted to a Boston hospital.”

Robida fled the scene. He is still at large and was wearing a black trench coat and driving a 1999 green Pontiac Grand Am with MA license plate 85E-C58 at the time of the shooting.
(more)