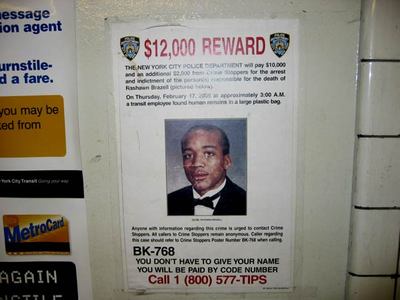 It has been a year since Rashawn Brazell was murdered and his body dismembered and left in a subway tunnel and recycling plant in Brooklyn. According to an article published yesterday in the NYT, investigators still have no leads: “We still don’t know where he got killed, or why. It’s frustrating.”

Mr. Brazell’s close friends still gather at his apartment on Gates Avenue, where his mother, Desire Brazell-Jones, surrounded by pictures of her son, keeps his room as he left it. The friends came over for the Super Bowl last week. In the old days, the teenagers would fall asleep on couches in the living room, she said. Had Mr. Brazell been there, he would have cooked for them, meals his mother laughingly called “experiments.”

“He was my best friend,” she said. His killer, she believes, could be getting close to someone else’s son, a notion that she says terrifies her.

Will anyone ever come forward?

A Year After a Teenager Was Dismembered, Still No Answer [nyt]