Australian Prime Minister John Howard is threatening legislation to block Australian Capital Territory’s new civil union law: “We will always seek to remove areas of discrimination against homosexuals but there is a special place in Australian society for the institution of marriage as historically understood and we do not intend to allow that to be in any way undermined.” 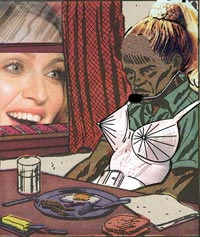 Are you ready to krump? Madonna wants to do for “body popping and breakdancing” what she did for vogueing in the early 90’s. “Madge has ordered a unique spinning platform to be designed so that she and her dancers can recreate Studio 54’s extravagant scenes. She has also ordered dozens of disco balls to decorate the stage with authentic seventies lighting. The new tour is also rumoured to be influenced by Madge’s love of horses as well as drawing on Oriental influences.” Meanwhile, an AIDS awareness comic distributed by Madonna one night at Madison Square Garden in 1987 has surfaced, and I guess the most notable thing to say about it is it has a really strange cover.

Ann Coulter has some explaining to do. The Palm Beach County Elections Supervisor wants an explanation as to why she voted in the wrong precinct. If she did it knowingly, it could be classified as a third degree felony. Lying on the voter’s registration can result in a $5,000 fine and up to five years behind bars. The Elections Supervisor, however, had to send their letter to Coulter’s friend’s house — where the piehole claimed to live. Supervisor: “We want to give her a chance. She needs to tell us where she really lives.”

Kentucky murderer Dale Moneypenny still on the loose. He and Jennifer Smith killed Charles Poynter and Blaise Thacker, 30-year-friends, separately in their homes early on the morning of March 24th.