Massachusetts upholds ban on non-resident same-sex marriages.
Justice: “The laws of this commonwealth have not endowed nonresidents with an unfettered right to marry. Only nonresident couples who come to Massachusetts to marry and intend to reside in this commonwealth thereafter can be issued a marriage license without consideration of any impediments to marriage that existed in their former home states.” 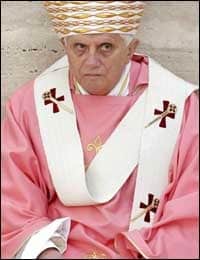 Pope Benedict inserts himself into Italian politics ten days ahead of the national elections. Reuters: “He said the Church had a right and duty to defend ‘the recognition and promotion of the natural structure of the family as a union between a man and a woman based on marriage’. It would oppose ‘attempts to make it juridically equivalent to radically different forms of union which in reality harm it and contribute to its destabilisation’.” In other news, the Roman Catholic church received 783 new claims of sex abuse by clergy in 2005.

American Idol contest Mandisa has been a powerhouse diva the past few weeks, occasionally blowing our minds while occasionally looking like she could appear onstage at gay bar USA. But is she gay-friendly or ex-gay friendly? The Advocate looks at her interest in writer Beth Moore, whose books and website advocate saving oneself from the “sins” of homosexuality. 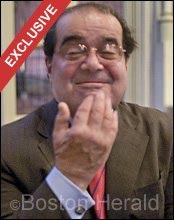 Justice Scalia caught in lie about obscene gesture at Cathedral of the Holy Cross. Photographer: “The judge paused for a second, then looked directly into my lens and said, ‘To my critics, I say, ‘Vaffanculo,’ ‘ punctuating the comment by flicking his right hand out from under his chin, Smith said.” Vaffanculo, according to AmericaBlog, means “go get fucked up your ass.”

British student forced to change schools after fellow students assemble bullying website accusing him of being gay. Student: “They had stolen photos of me from my website and put them on their site with really nasty comments underneath. I asked them to take the website down but they just laughed at me.”

Democratic Congresswoman Cynthia McKinney reportedly punches cop after alleged security incident. McKinney statement: “I know that Capitol Hill Police are securing our safety, that of thousands of others, and I appreciate the work that they do. I deeply regret that the incident occurred. I have demonstrated my support for them in the past and I continue to support them now.”