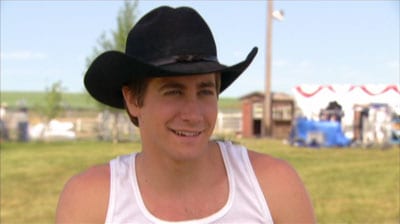 is slowly trickling out into the world. I was happy to get mine in the mail yesterday. But somehow it was missing the investigative extra on the shooting of the love scene! Grrr — I’ll hope for that on the Collectors Edition.

The extras include an Ang Lee directing short, interviews with Ossana and McMurtry, a general “Making of” short, and a short on how the actors trained to be cowboys. Here and there you get some nice behind-the-camera footage you haven’t seen before, and plenty of short interviews with the actors — I’ve screencapped a couple shots of Jake for you Gyllenhaalics, and here’s an excerpt from the segment on learning to ride:

JG: “Heath has known how to ride since he was a little kid. He’s done so many movies where he’s ridden a horse so I feel safe enough riding around Heath that if something goes wrong he’ll be able to fix it, make it look better…I came here probably about a month before we started shooting and I started riding and learning how to rope a little bit, and playing with some sheep and that kind of thing. So yeah, it was definitely cowboy camp. That’s what we called it – cowboy training camp.”

Oliver over at Thought Not is holding a contest for a free DVD if you’d like to film a short clip of yourself. Richard is starting a “No Straight Person Left Behind” campaign. 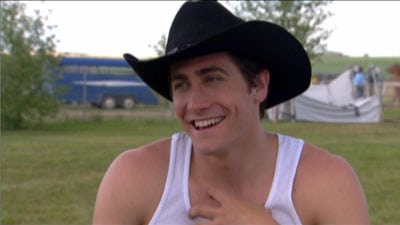 And my friend John Polly over at Logo’s blog dug up this newspaper ad for the DVD. I can think of a few people who might sign up for that job. 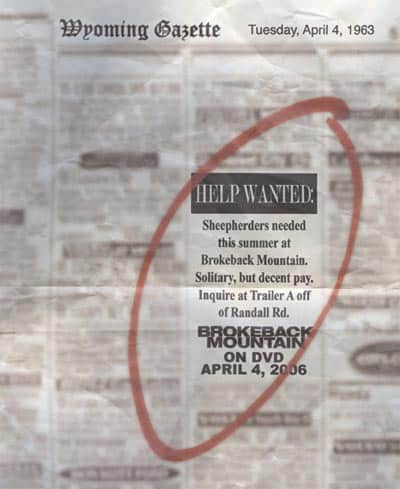