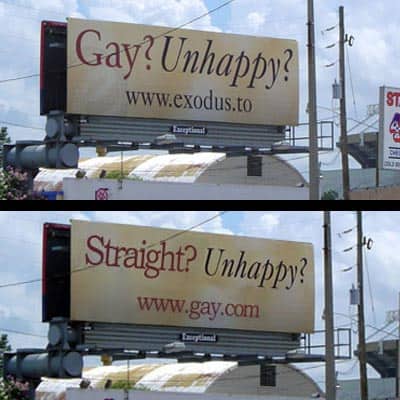 The case of Justin Watt, a blogger who created a parody of an Exodus International billboard, has been taken up by the ACLU. Exodus International, the group that promises “freedom from homosexuality through the power of Jesus Christ” became angry when Watt created and posted the parody billboard shown above.

Attornies for Exodus served Watt a cease and desist letter, saying that he had violated their intellectual property rights. The ACLU seems to believe it has a strong case in Watt’s favor, as parody is protected under the Constitution. ACLU: “His point was to make a comment on a very important issue he has strongly held beliefs about: that Exodus’s tactics are wrong, that there’s nothing wrong with being gay, and that being gay doesn’t make you unhappy.”

Previous Post: « Despatie the Hottie Rackin Up the Medals
Next Post: A Strange Sense of Deja Vu »