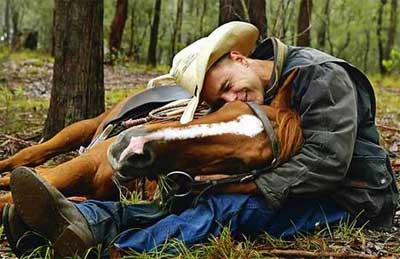 Heath Ledger has spoken about a friend who inspired his character in Brokeback and today the Sydney Morning Herald allows Adam Sutton, who spent some time on set while they were filming, to tell his coming out story.

After spending six months in jail for a drunk driving accident that killed a young man, Sutton spent time going from one job to the next before realizing his true calling as a cowboy. Unfortunately, he was still closeted, and thus the Brokeback analogy. “You’re meant to pull [women]. That’s what you had to do,” he tells the SMH. “I was scared of letting anybody know me better. I hated myself. I never let anybody inside my little circle, to know me. That was my front. It was a fort.”

But Sutton has since come out and hopes his example inspires gay kids in the Australian outback: “It takes courage and it takes strength and it takes that inner person to take hold and not worry what Tom or Harry down the road thinks. But it’s hard, you’re standing on your own island, singing your own song. I wouldn’t have done the things I’ve done if I had come out earlier in life. It would have changed the paths I took and it wouldn’t have been the same. That’s what makes it your life.”