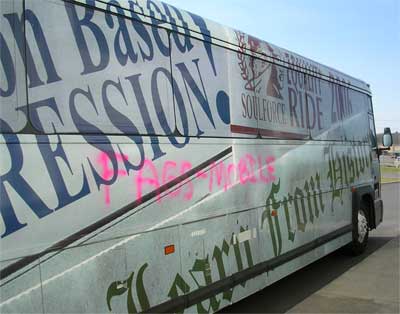 The gay activist group Soulforce’s bus was sprayed with hate graffiti Thursday evening near Lee University in Cleveland, Tennessee, reportedly by a middle aged woman and a teenager. Doing God’s work, no doubt.

The student activist group is touring the country to protest at universities that discriminate against gays and lesbians. Arrests have been made at their previous stops, Liberty and Regent Universities. They were planning for their next day’s activities at Lee— a prayer vigil in front of the President’s office —when the vandals struck.

Said Equality Ride co-director Jacob Reitan: “The attack on the bus is hate speech, plain and simple, spelled out for everyone to read. But a more subtle form of hate speech happens when students at the schools we are visiting are told they are sick and sinful just for being the lesbian, gay, bisexual and transgender people God made them to be.”

About the pink paint, Reitan added, “We might choose to paint over it or we might leave it on, sort of a display of intolerance.”

Too bad they don’t have Guy Pearce around to paint the whole bus pink and ride atop it in a silver stiletto. 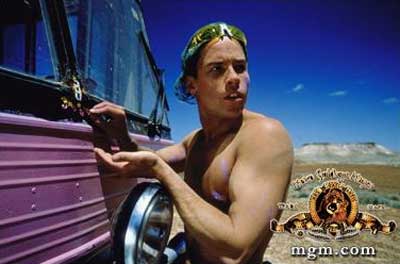