Armed gangs kidnapping gays in Iraq: “A Baghdad LGBT organization tells the news service that 12 of its members have been killed by kidnappers when their ransom demands could not be met. Another 70 have been threatened with kidnapping.” 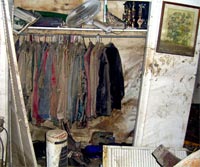 Queerty’s Dan Renzi visits New Orleans and has taken some sad and fascinating photos of the Katrina damage. It’s pretty shocking that this is all still there, but given our government’s response, not that shocking.

Students at South Rowan High School in China Grove, North Carolina have been denied their request to form a gay-straight alliance. A school board meeting also produced this disturbing scene: “The decision came in a meeting that drew more than 100 spectators at the board office in Salisbury. Television video taped at the meeting showed much of the crowd erupting into cheers after the board made its unanimous decision.” A parent member of PFLAG also spoke to the board and was booed as he left the microphone. Said parent Mike Clawson: “I, too, am here to speak for our children. [Homosexual students] are like everybody else’s children, and they deserve the same rights as everybody else. The bottom line is, it’s the law.”

Gay outcry over 12th Street Gym owner’s financial contributions to Rick Santorum forces him to sell his share to his partner. Gay activists had picketed outside the gym with signs that read “Santorum-free zone” and threatened a boycott. The gym has been open in the hub of the gay community for nearly 20 years. Philadelphia Gay News publisher Mark Segal: “This [sale] is a great success. If a good percentage of your business is gay and lesbian, and they’re going to boycott you, it’s a problem.”

Five Soulforce Equality Ride members arrested at Brigham Young University for yelling that the policies of the Church of Latter Day Saints are “killing gays.” The remaining 28 members of Soulforce were allowed to stay and speak to students. Jacob Reitan: “We are here to force the issue and say, ‘BYU, it’s time.’ We really feel these students don’t understand our message.”

Previous Post: « Rep: Jake Gyllenhaal & Austin Nichols Not a Gay Couple
Next Post: Fotolog Leaps Out of the Blogosphere »