Aaron Hicklin, former Editor in Chief of BlackBook, is OUT magazine’s new editor.

REPORT: Prison guard sets fire to inmate in Jamaica after the inmate calls him a homosexual. 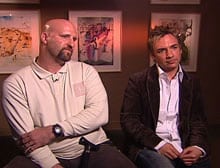 Gay bashing victim meets his neo-Nazi skinhead attacker 14 years later while they are both working jobs at L.A.’s Museum of Tolerance: “They quickly realize they’d met before. Yes, in that back alley in West Hollywood. After all these years, the victim and the perpetrator speak face-to-face. However, this time they’re on the same side, both trying to accomplish a little bit of good.

Last year, Charlize Theron told Extra that she and boyfriend Stuart Townsend would not marry until same-sex marriage was legalized. Saturday night she was awarded a GLAAD award for her support of gay and lesbian causes. She told the audience: “I feel so fortunate that I am in a relationship with a wonderful man. I find it incredibly unfair that because of our sexual preference, we have the rights that we have, and that, because of someone else’s sexual preference, they don’t have those same rights.”

Efforts to amend Alaska’s ban on gay marriage to further discriminate against gays and lesbians by denying them health benefits are stalling in the legislature.