Novelist who penned Whatever Happened to Baby Jane is dead at 85: “His stock in trade were stories of aging relatives, often siblings or cousins, who were living together while struggling with identity issues, rapidly declining mental acuity — and thoughts of mayhem.”

2007: Queen Mary to set sail on a transatlantic crossing with a boat full of gays.

Senior US Bishop William Skystad calls on all Roman Catholics to support the federal anti-gay marriage amendment: “”There is a growing sense shared by many people, including a wide range of religious leaders, that a marriage protection amendment is the only federal-level action that ultimately will protect and preserve the institution of marriage. In a matter of months we will have the opportunity once again to stand publicly in support of marriage as the God-given union of a man and a woman. I am aware that the time is short for taking action, so I urge you to do whatever you can, given the situation and the resources available to you.”

Florida to get its first gay rodeo this weekend.

Mandisa would not be comfortable performing at a gay event, according to a post-Idol interview she did with the Advocate: “Based on what I believe, I’m not an advocate for [being gay], so it’s nothing I would take part in.” There has been speculation that the portly diva may have been booted from the show after a gay voting-bloc discovered her anti-gay affiliations. 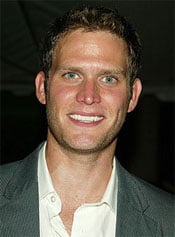 Writer Peter Tolan played a joke on Rescue Me cast hunk Steven Pasquale by writing himself into the script of the Denis Leary fireman drama. Tolan wrote himself into a script and had Pasquale’s character “come out of the closet and tell him he loved him” according to Page Six. Pasquale freaked out: “When Steven read the script, he stormed off set, saying he had already done this on ‘Six Feet Under,’ and ‘I’m not doing it again.'”

Washington Post upset that Rosie O’Donnell’s HBO family cruise documentary portrays gays and lesbians as “scrubbed-up” and “politely tidy” rather than sexual predators and drag queens: “O’Donnell almost robs her subjects of their sexual identity in the pursuit of making them wholesome. In short, there is no gay cruising on this gay cruise.”

Steven Spielberg and Mark Burnett team up for reality show that will give filmmakers a shot at a studio deal.