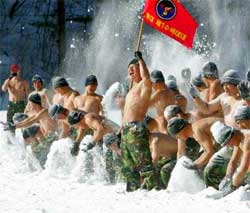 South Korea will revise or repeal rules on gays in the military after demands by human rights organizations: “The groups revealed some of [the military’s] counseling records, including the case of an army counselor who refused to counsel a gay solider unless the soldier submitted a photo of him having sex with a male partner to prove his homosexuality. The soldier was also forced to reveal how many times he had sex with male partners and even had to take a blood test to confirm whether he was infected with AIDS or other sexually-transmitted diseases.” No word on whether or not the homoerotic training exercises will continue, but we hope so.

Debate goes on in Iowa over anti-harassment policies in schools as father testifies with heartbreaking tale about gay son: “Even one of his teachers called him a faggot. My son was cheated out of a high school experience because he wasn’t safe in your hallways and classrooms. He was scared to death to be in school.” 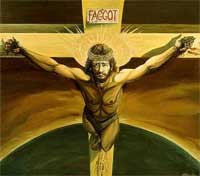 Website battles gay-bashing by Christians with radical images of Jesus.

Crystal Lake, Illinois gearing up for another round of Gay Games battle. Local paper peppered with angry letters from both sides: “How proud are we to live in such a narrow-minded, backward hateful community?”

Alan Ball signs on for feature film directing debut with Towelhead: “Set during the Gulf War, the coming-of-age story follows a 13-year-old Arab-American girl who must navigate a sexual obsession with a bigoted Army reservist under the oppressive eye of her Lebanese father.”

New Pet Shop Boys album may be delayed in America.