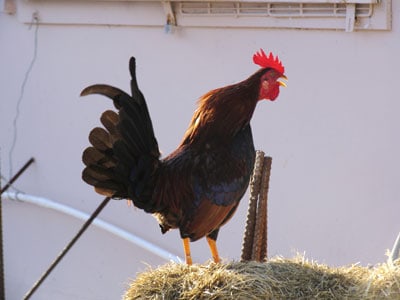 There are approximately 2,000 chickens that wander freely in Key West, and they’re impossible not to notice. I shot the photo above on my trip to KW last November. There’s a movement underway to round up all the chickens that roam the streets of this island, a rest stop for thousands of migrating birds. Fears that the avian flu could be spread to the town’s poultry population have some residents, including the City Commissioner Bill Verge, pushing for their removal.

Said Verge: “We’re not trying to spread panic about it. Just like the oncoming of a hurricane … it’s just called preparedness.”

Chickens have wandered the island since the mid-1800s, when cockfighting was a popular sport. Despite the fact that they “crow at all times of the day, tear up lawns and defecate everywhere” the fowl are like the island’s unofficial mascot.

So if you’re in the mood to round up some birds, head down to the island chain. And if you’d rather hunt for the kind of cock that doesn’t crow, there are plenty of great places to do that as well.