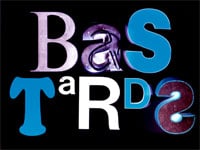 ‘s signage art for use as display in Barney’s.

Simon Doonan has responded to Cheim & Read, in a piece in this week’s New York Observer. Doonan says he had no prior knowledge of Jack Pierson’s work, a revelation that flummoxed Pierson when they spoke on the phone for the first time.

“I try to appease him by telling him that I am constantly meeting people who live in New York and have never heard of Barneys and—worse still—people who have zero awareness of me, my work, my three books, my Observer column or my endless America’s Next Top Model appearances. I tell him that people are very busy and distracted and not to take it personally, and to remember that art—his milieu—is now competing with an enormous amount of other cultural clutter, not the least of which are celebrity and SHOPPING.” 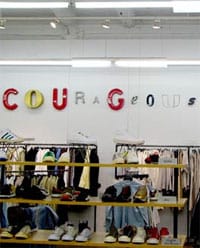 Apparently that wasn’t enough for Pierson, as Doonan soon received the email from John Cheim, the gallery owner, “cc’d to an extensive list of fancy-pants New Yorkers, everyone from Philippe de Montebello to “Ingrid Sichy.” (sic):

“A few brave souls leap to my defense, one suggesting that Jack Pierson’s desire for a monopoly was the equivalent of Marcel Duchamp trying to sue a urinal company.”

Doonan says he’s become the “Typhoid Mary” of the art world now, forgives both the gallery and Pierson for their vitriol, but rails against those who hold the art world up on a pedestal, particularly those working in what he calls the “post-skill movement.”

“Underlying the whole debacle is the horribly flawed idea that artists are somehow at the apex of our society. According to this ridiculous thinking, artists are somehow innately superior to us window dressers, or to coffee-shop waitresses and strip-club fluffers. Being an artist is not just a job or vocation, but something holy and infinitely worthy. In this topsy-turvy retarded world, the option to place a monopoly on a found object would automatically fall to an artist over a window dresser. Should that window dresser bump into an artist prowling the same wrecking yard, he should quietly step aside so that the artist can have first pick. For reasons too obvious to state, this idea does not go over well with me.”

Next move, Cheim & Read. Can’t we all just get along?

How Did I Become the Typhoid Mary of the Art World? [ny observer]
(via modern art notes)