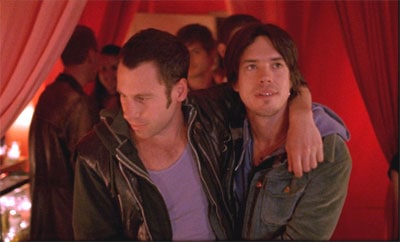 John Cameron Mitchell’s steamy exploration of character through sexual behavior, Shortbus, is long on buzz. Mitchell: “I actually like pornography, but I don’t consider this film pornographic. I define — and most people do — pornography as devoid of artistic intent. The purpose of pornography is to arouse. I don’t think anyone got [sexually aroused] watching this film. There is a certain provocation we had in mind with this film, but more important than that, we wanted to use sex as a metaphor for things that were, perhaps, universal, themes like connection and love and fear. We just thought the language of sex could be used the way the language of music could be used in a musical.”

As Elton John was presenting the Chopard Trophy to Transamerica‘s Kevin Zegers, a photographer interrupted and touched off Elton’s short fuse: “If you saw ‘Transamerica’ … I’m talking … you fuckwit, fucking photographers you should be shot, you should be all shot. Thank you.”

Ian McKellen says the Catholic church should welcome The Da Vinci Code: “I am only too happy to believe that Jesus was married. I know that the Catholic Church has problems with gay people and I thought this would be absolute proof that Jesus was not gay.”

Pedro Almodóvar‘s Volver “has captured the hearts of everyone at Cannes”: “I went into a light and very agreeable trance watching this movie, which Almodóvar unfolds with a master’s confidence: its ingenuities and contrivances float out of the screen. The cinematography and art direction by José Luis Alcaine and Salvador Parra give everything a gorgeous intensity that has the look of a Douglas Sirk film – and Almodóvar has something of Sirk’s passionate empathy with women, mixed with a playful, gay sensibility.”