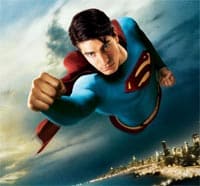 Warner Bros. must be really worried about how Superman’s gay image will affect box office if they’re sending Bryan Singer out to make statements. The director came out late last week and said that Superman “is probably the most heterosexual character in any movie I’ve ever made.”

The studio doth protest too much. As does DC Comics: “Paul Levitz, president and publisher of Superman owner DC Comics said: ‘We were all scratching our heads. He’s not a gay character.'” I haven’t read a single story that has said that Superman is gay, but there’s no denying that the character, with his secrets, his tights, the fuss about the size of his package, his jazz hands, and his co-stars, gives off a distinctly gay vibe, and what’s wrong with that?

Warner Bros. should just shrug off the worry and move on. They’re only fueling the gay flame by allowing the movie’s gay director to continue commenting on it.