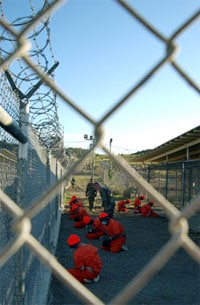 Ted Rall takes a half-sarcastic look at the Bush administration’s fascination with sickening, homoerotic torture techniques in light of the President’s attempts to “clarify” wording in the Geneva Conventions. Here’s a bit:

“In order to work in American military intelligence, it seems, you really have to like looking at wet naked men with hard, erect nipples. In particular, it helps to be into wet naked Middle Eastern men. As a guy who looks away from other dudes in locker rooms, I doubt I’d fit in.

Now one right-wing Republican, George W. Bush, is fighting a gang of right-wing Republican senators over homoerotic torture tactics. The debate isn’t about whether, but rather what kind, of homoerotic torture ought to be permissible. Bush is pretty much a whatever-it-takes, pro-flashlight-raping freak. Senators John McCain and John Warner are a little more vanilla. They want to set a few limits.

Jeffrey H. Smith, ex-general counsel for the Clinton-era CIA, says the senators are OK with the current menu of torture. “The senators seem to be prepared to allow some techniques, but not nearly as many as the administration wants,” he told The New York Times. Bush, on the other hand, wants to allow just about any form of pain infliction the human mind can conceive.”

U.S. Generals want a clear definition too. Others, including former Secretary of State Colin Powell and five former Joint Chiefs of Staff, think our country should obey the Geneva Conventions, for what we do unto others may be done unto us. Though many of his other decisions seem rooted in the Bible, that concept seems somewhat beyond Theocrat Bush.