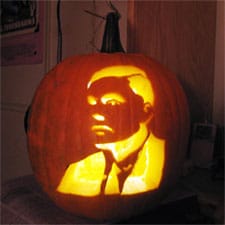 Check out this great Alan Turing Jack-O’Lantern. It was created using a stencil taken from a blog that posts them for graffiti artists. While I’ve posted about Turing here before, I think that the creator of the Jack O’Lantern, Meryl, sums up the points of Turing’s tragic bio quite nicely:

“The gentlemen depicted is Alan Turing, who is considered the father of modern computer science… maybe you’ve heard of the Turing test for artificial intelligence? He was British and worked for the British secret service as a mathematician and cryptographer until he was convicted of being a homosexual (which he was and which was considered a mental illness under the law). To avoid being sent to prison, he had to agree to undergo estrogen hormone therapy and he did for a year, but the homosexuality conviction caused him to lose his security clearance and therefore to lose his job. He killed himself a year later by eating an apple poisoned with cyanide, which seems a little ornate, I think. It’s quite a sad story, but he makes a delightful pumpkin.”

I’d have to agree.

For more on Turing read our previous post about the codebreaking machine he devised during World War II that has been recreated at Bletchley Park, England.

You may have missed…
Turing Bombe Recreated at Bletchley Park [tr]