The New Yorker cover that made fun of Dick Cheney’s now infamous hunting accident (in which he peppered 78-year-old Harry Whittington in the face with birdshot) by utilizing the cultural trope of the moment, the much-parodied Brokeback Mountain poster, won the award for “Best News Cover” of the year from the American Society of Magazine Editors and the Magazine Publishers of America. The cover was titled “Watch Your Back Mountain”. 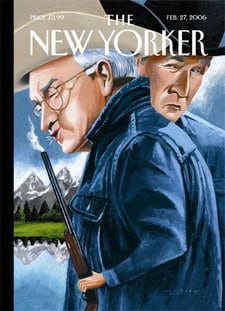 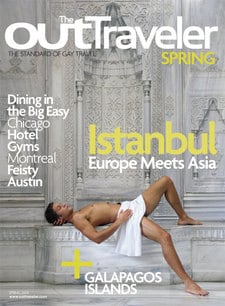 Said the judges: “[Mark] Ulriksen’s image evokes both the smugness of a vice president implicated in catastrophe and the cluelessness of a president incapable of stopping him. The image shows a couple of hapless chaps, prisoners of their fate and unable to alter the course of events they have set in motion.” Truer words were never spoken. Of course, some of you may prefer the less-refined version: Dumbfuck Mountain.

The Out Traveler tied for third place in the “Best Service Cover” category (that’s service industry-oriented, not what the model looks like he’s waiting for).

Said the panel: “A great travel cover is a glimpse into a moment, transporting a reader to another place and another frame of mind. It provides not only the encouragement to open the next page, but inspires a reader to think one important thought, ‘I wish I were there!’ This Istanbul cover evokes such a moment. Presenting a mix of quiet escape and sexy solitude, this repose in a classic hammam becomes a perfect passport to the Turkish city, and the compelling motivation to continue the journey inside.”

After the jump, this year’s winners for “Best Cover” along with the rationale behind the decisions. 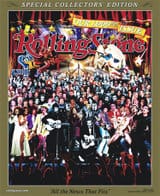 The New Yorker (September 19, 2005) – Flood in the Oval Office: “The ineptness of the response by FEMA and the U.S. government after Hurricane Katrina was an outrage to everyone who watched it unfold. The images of bodies floating unclaimed in murky waters were clear signs of the lack of care and empathy by those at the top of the government. In his cover, “Deluged,” Barry Blitt turns the tables on the situation. As the Oval Office is slowly submerged, the reader gets a release that goes beyond the first laugh and unleashes the floodgates of the nation’s collective anger.”

Rolling Stone (May 18-June 1, 2006) – 1,000th issue 3-D cover: “No magazine cover of the past year received more attention-or stretched the form as far-as Rolling Stone’s remarkable 3-D celebration of the past four decades of American pop culture. The playful and engaging use of the holographic image served as more than a mere visual stunt-it created the ultimate rock fantasy, a lasting and indelible celebration of a milestone in American magazine history.”

The Economist (July 8-14, 2006) – “Rocket man” Kim Jong-il of North Korea: “This cover appeared in the week following North Korea’s decision to launch a Taepodong rocket (which fizzled) and half a dozen others (which worked). The launch, noted The Economist, “was calculated to blast a hole in the diplomatic effort by America, South Korea, Japan, China and Russia to get Kim Jong-il’s regime to give up its nuclear bomb-building.” The Economist worried that Kim Jong-il’s “pyrotechnics” would “incinerate wider efforts to stabilize a region full of dangerous rivalries.” The cover captured the moment by picturing the elusive North Korean leader as dangerous “Rocket man.” Though considered a serious magazine, the cover demonstrates The Economist’s often irreverent take on the world’s events.”

Check them all out here.

You may have missed…
It Was Just Too Easy [tr]