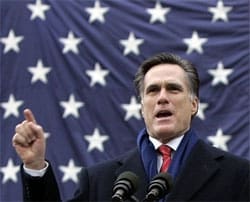 Standing before a giant American flag while loudspeakers blasted John Philip Sousa’s Stars and Stripes Forever, Massachusetts Governor Mitt Romney staged a publicity stunt for his anticipated presidential run by beating the old tired drum of discrimination, telling supporters he would ask the state’s Supreme Judicial Court to order an anti-gay marriage amendment onto the ballot should legislators fail to vote on it when they reconvene in January, which is highly unlikely.

Earlier this month, opponents of gay marriage were dealt what was called a “fatal blow” after lawmakers voted to push a constitutional convention to the last day of the legislative session on January 2nd, effectively killing a vote on the proposed anti-gay amendment. 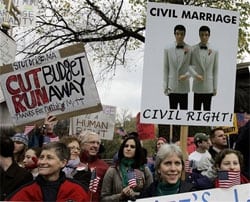 Said Romney: “The constitution quite plainly states that when a qualified petition is placed before them, the Legislature ‘shall vote.’ It does not say ‘may vote,’ or vote if procedures permit a vote, or vote if there are enough of the members in the chamber. It says, ‘shall vote.’…A decision not to vote is a decision to usurp the Constitution, to abandon democracy and substitute a form of what this nation’s founders called tyranny, that is, the imposition of the will of those in power, on the people. The issue now before us is not whether same-sex couples should marry. The issue before us today is whether 109 legislators will follow the Constitution.”

Mark Solomon, campign director for Mass Equality, disagreed: “One of the tenets of the Constitution is that you do not put the rights of a minority up for a popularity contest. It is one of the very principles this country was founded upon. Gov. Romney is trying to divide Massachusetts and use this issue as a device to run for president.”

Romney does not have legal authority to call lawmakers back into session.

Previous Post: « Rearview Mirror: Looking Back at the Week on Towleroad
Next Post: Mark Foley Attends Father’s Funeral in Shadow of Scandal »