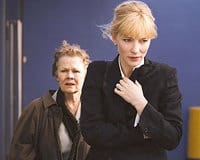 Judi Dench, Cate Blanchett and screenwriter Patrick Marber all received Golden Globe nominations this morning for the psychological thriller Notes on a Scandal which opens later this month and which I was lucky enough to see last week.

The film is an adaptation of Zoe Heller’s novel What Was She Thinking: Notes on a Scandal

and tells the story of desperately lonely and nosy schoolteacher Barbara Covett (Dench), who lives alone with her cat but desperately yearns for the company of another woman. Her yearnings fall into that unclear place between simple companionship and physical intimacy, though the latter remains mostly unspoken.

When Sheba Hart (Blanchett) is hired as the new art teacher at her school, Barbara’s curiosity is piqued. She makes it her business to know secrets about people, particularly her colleagues at the school. Covett immediately makes a deliberate push for Sheba’s friendship, pulling her under her wing as a friend and confidante. It’s a relationship that soon becomes one-sidedly obsessive and smothering, a fact that is not lost on Sheba’s husband, who notices Sheba’s increasingly frequent absences from their home in Islington.

Barbara dislikes the fact that her new companion must often go off with her family, so when she discovers that Sheba has become sexually involved with one of her cocky, alluring, underage male students (played pitch-perfect by newcomer Andrew Simpson), Barbara sees an opportunity to seize Sheba’s friendship once and for all by using the dangerous affair as a bargaining chip for blackmail.

Dench gives a charged, riveting performance that is as strangely sympathetic as it is frightening. The film plays brilliantly with themes of isolation, desire, and secrecy as Barbara’s insidious and sociopathic strategies to obtain the companionship of Sheba run parallel with Sheba’s naive and dangerous romantic flings with the athletic, sexually insatiable boy. They’re both out of control in their own way, and the threat of exposure is the gunpowder that waits to blow everything apart.

I haven’t read the novel, but if it’s as much a page-turner as Marber’s beautifully-paced, insightful (and very funny at times) screenplay, there’s a lot to be said for it.

My final note is on the Philip Glass score, which lends the film a dread and excitement reflective of the urgent performances turned in by Dench and Blanchett. Highly recommended.