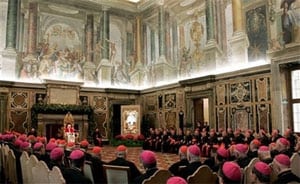 Pope Benedict XVI, in a Christmas address to the Rome clergy, took the opportunity to slam both gay and unmarried couples. He warned that mankind would destroy its own identity should it follow theories which place same-sex couples at the same level as husband and wife, theories “according to which man should be able to decide autonomously what he is and what he isn’t.”

He added that supporting same-sex marriage “tacitly accredits those dismal theories that strip all relevance from the masculinity and femininity of the human being as though it were a purely biological issue.”

The Pope defended his right to speak out about the relationships as tensions rise in the Italian parliament and between the Vatican and Italian Prime Minister Romano Prodi, who has pledged to fulfill a campaign promising civil partnership rights for both same-sex and unmarried couples. Said Benedict: “I cannot hide my concern about legislation on de facto couples…if they say the Church shouldn’t interfere in these matters, then we can only reply: should mankind perhaps not interest us?”