Former General and Chairman of the Joint Chiefs of Staff John Shalikashvili agrees with a recent Zogby poll that says American servicemembers are ready to serve alongside openly gay members of the military. 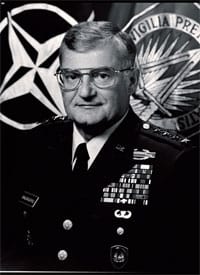 In a New York Times op-ed, Shalikashvili has called for a repeal of “Don’t Ask, Don’t Tell”:

“I now believe that if gay men and lesbians served openly in the United States military, they would not undermine the efficacy of the armed forces. Our military has been stretched thin by our deployments in the Middle East, and we must welcome the service of any American who is willing and able to do the job.”

According to the Zogby poll, “More than half (55%) of the troops who know a gay peer said the presence of gays or lesbians in their unit is well known by others.” Shalikashvili feels that the time is right (unlike when Clinton considered it in the 90’s) to reconsider the ban on gay troops but says it’s prudent not to let it distract from developing a more effective U.S. strategy in Iraq.

As for that new strategy, Bush appears to be on the verge of announcing an increase in troops to the region as part of his new plan: “Its central theme will be sacrifice.”

Do the deaths of 3,000 troops not represent enough sacrifice?

The American public does not support an increase in troop levels, and neither do many Republicans, according to reports. Unfortunately for Bush, a Democratic majority in Congress may mean he’ll have to sacrifice a few of his ridiculous ideas.