Microsoft Zune a “non-event” this holiday season: “Visits to the iTunes website on Christmas Day outnumbered those to Zune.net by 30-to-1, market researcher Hitwise says.” 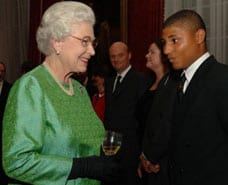 Christians beg Queen of England to put a stop to gay rights laws: “The plea to the Queen is being made by the Christian Concern for Our Nation, an offshoot of the Lawyers’ Christian Fellowship, a group which lists more than 2,000 barristers and solicitors among its members. The petition warns the Queen the rules are a ‘serious affront’ to the Gospel. It reads: ‘The regulations purport to eliminate discrimination on the grounds of sexual orientation, but have the consequence of discriminating heavily against Christians of all backgrounds and denominations who hold firm to the very Faith which you pledged to uphold in your coronation oath.’”

I’ve heard both good and bad reviews of Jennifer Hudson’s December 30 performance at New York’s Hammerstein Ballroom. In any case, here’s how she looked…

Social networking site Out Everywhere axes members due to fears of cyber-stalking: “Over the past two years the popularity of sites such as MySpace has rocketed. The stratospheric valuations of many of them has been largely predicated on the numbers of members they boast, but the dash to build up membership may mean some are becoming easy targets for scam artists, experts believe.”

Britney Spears reportedly collapsed in Vegas over New Year’s. Her handlers said otherwise: “By about one o’clock, she was just done, so we took her out. She was not drunk. She was just tired and falling asleep.” What else after a year like this!