Via The Cup of Joe comes this great piece from today’s Wall Street Journal about Tim England and Rob Kent, a couple together for nearly 20 years, who bought Gerald Ford‘s childhood home in 1991 and restored it. In the process, they caught the attention of Ford, and developed a friendship with the former president. 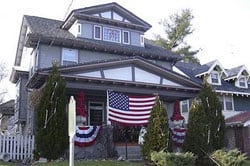 “After moving in, Messrs. Kent and England painted walls and did a lot of patching. They replaced all 36 windows and the three outside doors. They scoured yard sales for antique clocks, lamps, chairs and bookcases to give the house a vintage feel. Mr. England bought an old chandelier and restored each of its 500 crystals by hand. The two men planted a garden in the barren backyard. The restoration, and others like it, helped improve the neighborhood.

Then in 1992, a letter arrived from President Ford out of the blue. “Mrs. Ford and I are very pleased and honored that you have done such a wonderful restoration of my family home,” he wrote. Excited that the former president had taken an interest, the two men tried to have the house designated as a historical landmark and sought public funds to help with the restoration.”

Ford later paid a visit to the couple and they began corresponding. As Joe notes, “Isn’t it nice to read about non-gay-baiting Republicans?” It certainly is, and their actions perhaps contributed to Ford’s views on gay marriage. News of Ford’s death was poignant for the couple:

“Just past midnight on Wednesday morning, after Messrs. England and Kent went to bed, a friend called and told them to turn on their television. Watching the report of Mr. Ford’s death, Mr. England says he felt sick to his stomach. A few minutes later, a local news crew pulled up in front of the home in the darkness. Mr. England went outside and pleaded with them to wait before they started shooting. He brought out the big American flag and draped it over the front porch. Then he told them they could start their cameras.”