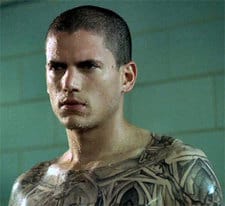 In a recent interview with the Australian Associated Press, Prison Break star Wentworth Miller seeks to dispel certain rumors about his sexuality:

“No, I’m not gay. I know these rumours are out there … I’m cool with the fact that they exist, I mean this is about fantasy. Certain people are going to have certain fantasies, if someone wants to imagine me with a woman, or a man or one of each that’s cool with me as long as you keep watching the show.”

He also says the trappings of fame take a bit of getting used to: “What happens to your identity, to the perception of who you are on this journey is a strange one,” he said while on his first visit down under. There’s this kind of star struck dynamic, I guess that’s why they invented that word to describe that moment when a fan comes running up to you and they’re so excited to see you. (But) inevitably there’s this moment, where the shoe drops and they realise they have no idea who you are. I guess it’s that strangeness, the identification with an actor, with a character, (and) the reality that you don’t really know them at all which is kind of hard to wrap your head around.”