Although men 18-27 are required to serve in Russia’s military, many avoid it at all costs due to ongoing abuse of conscripts by their superiors. Now, a soldiers’ rights group alleges that Russian conscripts are forced into male prostitution by their superiors who demand the money they earn from it: 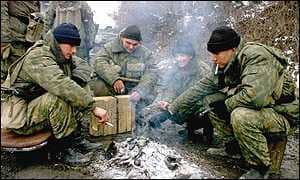 An activist with the group in St. Petersburg, Lyubov Yezheleva, told The Associated Press it learned about the alleged abuse from a 20-year-old conscript.

“He said he was forced into male prostitution by fellow soldiers who beat him and demanded that he earn money for them,” Yezheleva said. She said the conscript was serving with the interior troops unit No. 3727, in the center of St. Petersburg near the renowned Hermitage art museum.”

Conscript abuse appears to be a tradition in the Russian military according to an opinion expressed on the BBC in 2000: “It is important not that the conscript serves, but that he suffers”