Hawaii lawmakers kill civil union bill by refusing to vote on it: “More than 100 people packed the House Judiciary Committee hearing Tuesday, many waving pink signs reading, ‘Civil Unions. Equal protection, justice for all.’ At least 400 people submitted extensive written or oral testimony. After five hours of testimony, though, the committee declined to vote. Representatives offered little explanation to the public, but it was a sign that the bill lacked enough support to become law.” 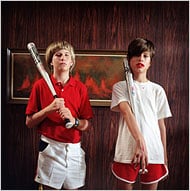 “Aching adolescence” explored in new film Wild Tigers I Have Known: “Newly aware of his homosexual urges, Logan is too naïve to camouflage his desires by putting up a front. And the film captures his vulnerability and dismay when his classmates reject him and spread the word that he’s gay, even though his explorations haven’t gone beyond the point of staring at other boys in the locker room. Even his straight best friend, Joey (Max Paradise), a science nerd who has made an amusing list of ‘ways to be cool,’ begins to withdraw after Logan insists on putting on lipstick for a snapshot.”

“Ex-gay” leader Randy Thomas on newly out financial guru Suze Orman: gays haven’t suffered enough to deserve civil rights. “From another angle, this also does not help some in the gay activist community with their attempts to make this battle, over redefining marriage, a ‘civil rights’ issue. Suze and her partner worrying over their ‘millions’ doesn’t have the same ring or impact as watching young black people being knocked down by fully opened fire hoses and mauled by tax payer funded police dogs. I don’t think Suze or Tammy would ever make that comparison but some in the activist community do equate the marriage battle with the civil rights battle of the African American community and that is tragic.”

Rupert Everett to be “chief of parade” at Sydney Mardi Gras. Everett: “Like JFK, but without the assassination.”

Judith Light to be honored for her work for HIV/AIDS. David Mixner: “In just over a decade, Judith Light has participated in near 400 events relating to HIV/AIDS. I think it would be almost impossible to find a leading actress who has done more in the battle. Not only has she allowed her celebrity to be used to raise funds and create awareness, she personally has been a caretaker to people with HIV/AIDS. Judith Light was an activist and caregiver when few others were willing to even lend their names.”

Liz Taylor turns 75: “Taylor’s voice was soft and she seemed frail as she chatted briefly with reporters, telling them her secret to making it to 75 was ‘just living a very healthy, clean life.'” (photos)

Katherine Heigl leaving Grey’s Anatomy? Money is the reason, not a bigoted co-star.