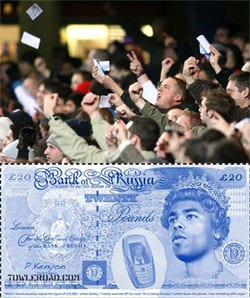 For the first time, Football Association officals have put in place regulations that will treat homophobic behavior at football games with the same zero-tolerance policy that restricts racist epithets.

In response to a season where footballer Ashley Cole was taunted by fans who printed up hundreds of banknotes bearing his image as the Queen, as well as past incidents that targeted both fans of certain clubs and players Sol Campbell and Graeme Le Saux, the Football Association says this makes the rules clear.

A FA spokesman told the British tabloid The Sun: “This is the first time we are specifically and pro-actively addressing the issue of homophobic behaviour. These new regulations have been designed to allow clubs to fully address this issue.”