Apple’s CEO Steve Jobs makes a compelling argument in a letter to music executives on apple.com, about iTunes’ DRM (digital rights management) system FairPlay, which limits the use of song files protected with the system to iPods. He notes that this system was created in order to appease the major record companies who were leery about allowing their catalogs to be bought by digital download. Yet, he points out, the majority of music sold is on CDs, which have no piracy protection: "20 billion songs were sold completely DRM-free  and unprotected on CDs by the music companies themselves." Jobs calls for the major record companies to allow the online sale of their catalogs without any digital rights protections, just as they do with CDs, thus opening iTunes to all competing MP3 devices.

Response to Jobs call to action has been mixed. The RIAA responded to Job’s statement by suggesting, instead, that Apple license their DRM technology to all device makers. A Warner Music executive rejected Jobs’ "manifesto" outright: "The notion that music does not deserve the same protection as
software, film, video games or other intellectual property, simply
because there is an unprotected legacy product in the physical world,
is completely without logic or merit." Meanwhile, the Wall Street Journal reported today that EMI, one of the "big 4" major record companies, is experimenting with selling their catalog in DRM-free MP3 format.

Samsung released a new smartphone with a very familiar look. The F700 has a full touch-screen across its shiny black encasing, and has all the usual smartphone technology plus a slew of media-capable features, including an MP3 player. The main difference between it and the iPhone is that the F700 has a full QWERTY slide-out keyboard…and a bulkier name. No word yet on where or when it will be available, but its emergence has been noted as strong competition for the forthcoming Apple product.

A New York Senator plans to introduce a state bill that will ban listening to music or talking on a cell phone while crossing the street. He notes that multiple people have died after being struck because they were distracted or unable to hear warnings while crossing into traffic. Said Senator Carl Kruger: "This electronic gadgetry is reaching the point where
it’s becoming not only endemic but it’s creating an atmosphere
where we have a major public safety crisis at hand." 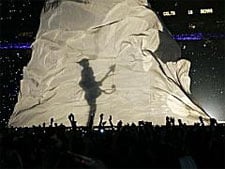 Is "IM speak" bringing a new wave of grammatical errors to students, or is there a revival in enthusiasm for the work of Prince? "An increasing number of eighth-graders submit
classwork containing ‘b4,’ ‘ur,’ ‘2’ and ‘wata’ — words that may
confuse adults but are part of the teens’ everyday lives."

Amazon and Tivo have teamed up to offer movie and TV downloads from Amazon’s Unbox service to play through Tivo’s set-top boxes. When customers buy (or rent, according to the official website) movies online at Amazon, at prices starting from $1.99, they can opt to have them sent to their Tivo. The program is still in Beta testing, but will be rolled out soon.

Previous Post: « England Banning Homophobic Chants at Football Games
Next Post: Rearview Mirror: Looking Back at the Week on Towleroad »