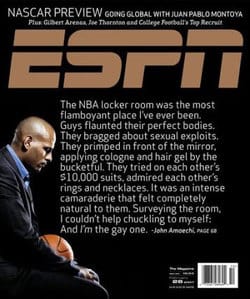 Said Amaechi: “I don’t need Tim’s comments to realize there’s a problem. People said that I should just shut up and go away – now they have to rethink that.”

Hardaway made the comments to a radio host Wednesday, when asked about Amaechi’s recent disclosure that he is gay. Said Hardaway: “First of all I wouldn’t want him on my team. Second of all, if he was on my team I would really distance myself from him because I don’t think that’s right and I don’t think he should be in the locker room while we’re in the locker room…Well, you know, I hate gay people. I let it be known, I don’t like gay people. I don’t like to be around gay people…Yeah, I’m homophobic. I don’t like it. It shouldn’t be in the world, or in the United States. So, yeah, I don’t like it.” (video)

Amaechi also spoke to Dan Le Batarad (the host of the show on which Hardaway spewed his hate) at the Miami Herald on Wednesday evening saying that Hardaway’s comments open a window into what gay athletes may have to face in professional sports. Said Amaechi: “I’m actually tempted to laugh. Finally, someone who is honest. It is ridiculous, absurd, petty, bigoted and shows a lack of empathy that is gargantuan and unfathomable. But it is honest. And it illustrates the problem better than any of the fuzzy language other people have used so far.”