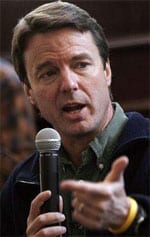 In response to the Military Readiness Enhancement Act, a bill calling for the repeal of the military’s Don’t Ask, Don’t Tell policy which was proposed by a bipartisan congressional group and Rep. Marty Meehan earlier today, Senator John Edwards released the following statement:

“It is long past time to end the military’s ‘Don’t Ask, Don’t Tell’ policy and to allow openly gay men and women to serve in the military. It is critical to our national security that we have the best people in our military. Gay men and women have continually served our country with honor and bravery, and we should honor their commitment and never turn away anyone who is willing to serve their country because of their sexual orientation. This is an issue of fundamental fairness – and our military ought to treat everyone fairly. I applaud Congressman Meehan on his important legislation.”

Also, as a follow-up to the post from this morning, gay Iraqi war veteran Eric Alva wrote up a nice piece today over at The Huffington Post.

You may have missed…
First Marine Wounded in Iraq Comes Out of the Closet, Calls for Repeal of “Don’t Ask, Don’t Tell” [tr]
(thanks lane)