They come from a land down under. Australian researchers monitoring the activity of Koalas in captivity discovered that female koalas will turn to their own sex for mating, rejecting their male suitors and frequently engaging in group sex. 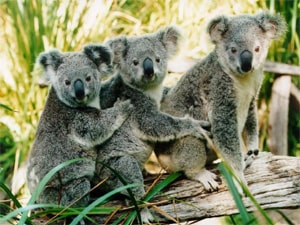 The scientists studied 130 koalas with digital cameras and plan to report their findings in the journal Applied Animal Behavior Science.

You may have missed…
San Francisco Gay Penguins Move in, Improve Neighborhood [tr]