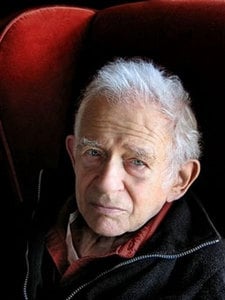 , his recent tome about the youth of Adolf Hitler. It’s not Hitler but his older brother with the homosexual inclinations.

“Young ‘Adi’ has an older brother who puts ‘his happy blood-filled organ’ into the ‘yearning lips’ of an elderly beekeeper and whose buttocks ‘feel like the portals to a bounteously endowed temple.’ The author, 84, wrote more than 50 years ago that he was ‘guilty’ of ‘attributing unpleasant, ridiculous, or sinister connotations to the homosexual … characters in my novels.’ So what’s changed? Was it firsthand research? ‘You have to cross the Rubicon to do that [and] I didn’t feel comfortable doing that,’ he says. ‘But then I thought, Come on, it’s not that hard to imagine what it’s like.’ Is there some safety in his age? ‘Oh, yes. When you’re younger, it takes more courage to be brave. You can lose so much. It’s enjoyable to be brave now, whereas when I was younger it was hairy and sweaty.'”

Considering Mailer spends the bulk of his time at his home in Provincetown, Massachusetts (where things are often “hairy and sweaty”), he’d probably be more likely than most to understand what “crossing the Rubicon” entails.

Advertisements for a Gay Self [intelligencer]