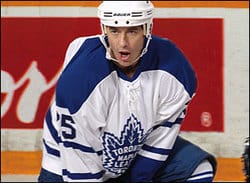 The Canadian film Breakfast with Scot (based on a 1999 novel by Michael Downing), which tells the story of a gay couple (a former Toronto Maple Leaf and the team’s lawyer) who become the guardians of an eleven-year-old boy struggling to understand his sexuality, is already the target of protests from anti-gay groups, the L.A. Times reports.

The film marks the first time the NHL has approved the use of its uniforms and logos in a gay-themed film, so naturally they’re the target. Leading the charge is San Diego-based Christian activist “ex-gay” James Hartline (center in photo below), who hasn’t seen the film but feels confident in proclaiming that it sends the wrong message:

Without having seen the movie, Hartline called it “degrading” and condemned the NHL for “promoting homosexualization of small children.” He added, “The National Hockey League is now becoming a willing partner with the fringe elements of the radicalized homosexual agenda and their ultimate goal of worldwide sexual anarchy.”

His dismay is shared by Brian Rushfeldt, co-founder and executive director of the Canada Family Action Coalition. Rushfeldt said the Maple Leafs were “underwriting homosexuality” by permitting the use of their name and logo.

“This is another attempt by certain individuals to normalize homosexual behavior, and they assume that the Maple Leafs will help the cause,” Rushfeldt said. “I don’t think it does much for the image of the NHL amongst families who may want their children involved in hockey.”

The LAT notes that “the NHL has long been insular and conservative”, its ice rinks a bastion of macho ideals. The release of Breakfast with Scot in late spring or early summer in Canada, and the recent coming out of former NBA player John Amaechi will certainly cause folks to speculate on what would happen if an NHL player came out of the closet.

Conveniently enough, two current NHL players recently voiced their opinions on the topic, thanks to Amaechi’s recent disclosure. Chris Chelios, who plays defense for the Detroit Red Wings, says he wouldn’t care if a teammate came out:

“I don’t consider it any issue at all. As far as I’m concerned, it’s a non-issue. I don’t care if a guy comes out and says he’s not gay or he comes and says he’s gay. Who cares? I don’t know who made that an issue. [John Amaechi] wants to go public with it, that’s fine. I don’t see people coming out and saying, ‘I’m not gay,’ so to me, I never got that. To me, it’s a non-issue. I don’t understand it; why there are gay marches. Why aren’t there not-gay marches?”

Henrik Zetterberg, a centre for the Red Wings, said that although a gay player might be hammered on the ice because of his sexuality, gays have as much right to play as anyone else: “I’ve probably played with a gay guy during some point in my career, but I didn’t know about it. I think that if you are gay, you would probably keep it to yourself until you stop playing. I think in games and such, I think they would be on him a lot. Unfortunately right now, I don’t think you can play when you’re (openly) gay. But they have the right to play hockey, too.”

Breakfast with Scot is in its final editing stages, according to the paper. The film does not yet have a U.S. distributor.