It was inevitable there was going to be one lame gay joke during the Super Bowl commercials. I’m just shocked that it didn’t have anything to do with Brokeback Mountain. 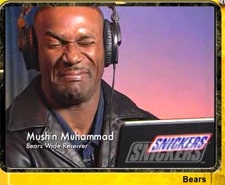 I wasn’t too offended by the commercial itself, mainly because it makes the mechanics out to be social neanderthals. However, take a look at the Snickers site, which features four versions of the commercial with different endings, along with players from the Colts and the Bears reacting to the commercials.

Here’s the real stinker, the “Extras” at the bottom of the page. If you want to know why a football player in the NFL might be hesitant to come out of the closet, take a look at the players’ reactions to the kiss. Shame on Snickers for promoting homophobia in professional sports. These are ‘role models’, folks!

Bears Tight End Desmond Clark: “Did they actually have to kiss like that? I hope they got paid a lot of money to do that.”

UPDATE: John Aravosis at AmericaBlog (from whom I borrowed the Muhammad screenshot) responds…

And HRC’s Joe Solmonese has issued a statement. Text follows after the jump…

UPDATE 2: The Snickers Super Bowl ad website is currently down as of 6pm EST…

UPDATE 3: Aravosis received a call from Masterfoods: “Masterfoods, Mars and Snickers parent company (or something), called to let me know that while humor is highly subjective, and their target market for the ads did give them positive feedback (that would be the neanderthal gay-bashing fans of Snickers?), they did not intend to offend anyone and will not be airing any of the four ads ever again, nor will they be airing the commentary from the NFL players responding to the ads. This includes not airing the ads during the Daytona 500, which they had earlier said they planned to do.”

Text of statement from HRC:

WASHINGTON – The Human Rights Campaign, the nation’s largest gay, lesbian, bisexual and transgender civil rights organization, is calling on the makers of Snickers, and its parent company Mars Inc., to pull the ad campaign launched yesterday during the Superbowl. The ad features two presumably straight men who accidentally engage in a kiss and then try to distance themselves from any perception of being gay by “doing something manly.”

Three alternate endings to the commercial spot are posted on the Snickers website, one of which includes the two men violently attacking one another – which sends a dangerous message to the public condoning violence against gay Americans.

“The makers of Snickers and its parent company at Mars should know better. If they have any questions about why the ad isn’t funny, we can help put them in touch with any number of GLBT Americans who have suffered hate crimes.”

Two other video clips posted on the Snickers website feature players from the Bears and the Colts watching the ads and responding to the two men kissing.

“This type of jeering from professional sports figures at the sight of two men kissing fuels the kind of anti-gay bullying that haunts countless gay and lesbian school children on playgrounds all across the country. Eighty-four percent of GLBT students report being verbally harassed at school, and this type of ad only reinforces that.”

“Is Snickers suggesting that people who eat their candy bars are cavemen? It’s an odd market to court, particularly after the Isaiah Washington flap a couple weeks ago, which clearly showed that there’s a strong distaste out there for people who portray themselves as anti-gay or holding on to old prejudices and stereotypes.”

“Mars and Snickers need to pull the ‘Wrench’ ad and the footage of the NFL players out of their campaign immediately.”

The Human Rights Campaign is America’s largest civil rights organization working to achieve gay, lesbian, bisexual and transgender equality. By inspiring and engaging all Americans, HRC strives to end discrimination against GLBT citizens and realize a nation that achieves fundamental fairness and equality for all.

Previous Post: « Rearview Mirror: Looking Back at the Week on Towleroad
Next Post: “Paralyzed by Shame”, Ted Haggard is Leaving Colorado Springs »