Barack Obama talked to Wolf Blitzer on yesterday’s The Situation Room and clarified his actions and statements following Joint Chiefs of Staff Chairman General Peter Pace’s remarks that homosexuality is “immoral”. Obama and Hillary Clinton were criticized shortly after Pace’s remarks for refusing to say whether or not they agreed with him. 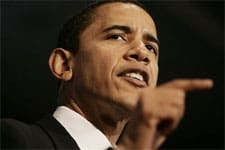 Said Obama: “I’m not sure that the story got out there properly. I mean, what happened was I was leaving a firefighters’ union meeting and trying to get in my car and did not respond to a reporter’s query at that point. I wasn’t responding to reporters period because I was trying to make a vote. Subsequently I made it very clear. I don’t think that gays and lesbians are any more moral or immoral than heterosexuals and that I think it is very important for us to reexamine the ‘don’t ask, don’t tell’ policy because it’s costing us millions of dollars in replacing troops that by all accounts are actually doing a good job but are simply being kicked out of the military because of their sexual orientation.”

He also reiterated his feelings about gay marriage and civil unions:

“Well, I think that ‘marriage’ has a religious connotation in this society, in our culture, that makes it very difficult to disentangle from the civil aspects of marriage. And as a consequence it’s almost — it would be extraordinarily difficult and distracting to try to build a consensus around marriage for gays and lesbians. What we can do is form civil unions that provide all the civil rights that marriage entails to same sex couples. And that is something that I have consistently been in favor of. And I think that the vast majority of Americans don’t want to see gay and lesbian couples discriminated against, when it comes to hospital visitations and so on.”

Previous Post: « Towleroad Guide to the Tube: #107
Next Post: SC Couple Says Hotel Turned Them Away for Being Gay »