John Edwards and his wife Elizabeth told reporters today in Chapel Hill, North Carolina that although Elizabeth’s cancer has returned, the diagnosis will not dampen their spirits and they will continue Edwards’ run for the Democratic nomination for president in 2008. 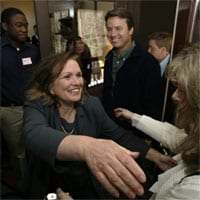 Elizabeth Edwards was diagnosed with breast cancer late in her husband’s 2004 campaign for vice president with Senator John Kerry. Today she announced that the cancer has returned to her rib and was discovered after she felt pain caused by a recent rib fracture.

Said John Edwards: “We are very optimistic about this because having been through some struggles together in the past we know the key is to keep your head up and be strong. We intend to do that.”

As for his wife’s cancer, Edwards said: “It is no longer curable. It is completely treatable. Many patients in similar circumstances have lived many years undergoing treatment. We will be in this every step of the way together.”

Elizabeth added, “We’re always going to look for the silver lining. That’s the kind of people we are. I do not expect my life to be significantly different.”

As for Edwards’ campaign, he said: “The campaign goes on strongly. Elizabeth and I have talked at length about this, we’ve talked to our children about it. Basically, we’ve been confronted with these kinds of traumas and struggles already in our lives, and we know from our previous experience that when this happens you have a choice – you can go cower in the corner and hide, or you can be tough and go out there and be tough and stand for what you believe in. Both of us are committed to the cause. We’re committed to changing this country that we love so much, and we have no intention of cowering in the corner. None whatsoever.”

Edwards also announced the couple would leave the press conference and head to New York, Boston and California together to continue the campaign.