Garrison Keillor issued an apology for the “misunderstanding” he created in a column last week, an apparently “tongue in cheek” look at parenting and the good old days. For many, including myself, the tongue was not far enough into the cheek. Here’s a portion of the apology: 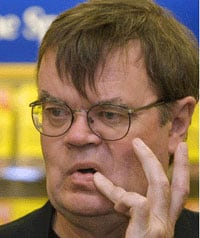 “I live in a small world—the world of entertainment, musicians, writers—in which gayness is as common as having brown eyes. Ever since I was in college, gay men and women have been friends, associates, heroes, adversaries, and in that small world, we talk openly and we kid each other and think nothing of it. But in the larger world, gayness is controversial. In almost every state, gay marriage would be voted down if put on a ballot. Gay men and women have been targeted by the right wing as a hot-button issue. And so gay people out in the larger world feel besieged to some degree. In the small world I live in, they feel accepted and cherished as individuals, but in the larger world they may feel like Types. My column spoke as we would speak in my small world and it was read by people in the larger world and thus the misunderstanding. And for that, I am sorry. Gay people who set out to be parents can be just as good parents as anybody else, and they know that, and so do I.”

Dan Savage has a thoughtful analysis of exactly why Keillor just didn’t get it. I do accept Keillor’s apology, but somehow I doubt he’s naive enough to believe his column isn’t being read by more than a handful of folks in Small Town, Minnesota.

You may have missed…
Garrison Keillor: A Bigot’s Home Companion [tr]