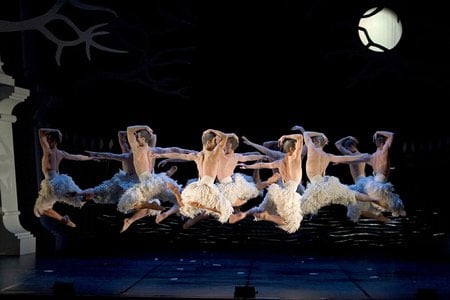 Matthew Bourne, who dazzled audiences with his all-male version of Swan Lake in 1995, plans to tackle Shakespeare’s Romeo and Juliet in an upcoming production entitled Romeo, Romeo, the Sunday Times reports.

Bourne says that the adaptation presents challenges due to the male-female dynamic of traditional dance partnering:

“It’s more to do with dancing than with sexuality. A male dancer, whether he’s gay or straight, fits into a relationship with a female partner very happily. Getting away from that, making a convincing love duet, a romantic, sexual duet, for two men that is comfortable to do and comfortable to watch — I don’t know if you can. I’ve never seen it done…I have a way of approaching it so as to make it — I hate to say ‘acceptable’, it’s a terrible thing to say — but so that people don’t run screaming from the theatre. I let them find their own way with it, take it as far as they want in their own heads.”

Bourne plans to begin rehearsals early next year after a summer of improvisation and testing of scenes with small groups of dancers.