[by Arjan Writes, guest blogger] Mika is just everywhere these days. People are raving about this new pop sensation whose debut album Life In Cartoon Motion debuted at #1 in the U.K. a few weeks ago. His single “Grace Kelly” also shot to the top of the British pop charts and held the coveted position for more than four weeks. 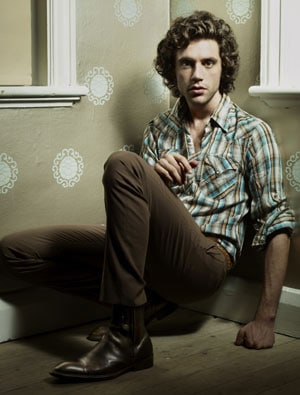 The Lebanese crooner who lives in London is now ready to conquer North America. He has been playing showcases in the U.S. to promote the U.S. release of his album next week.

Turned off by mediocre television singing contests and inspired by great songwriters of the ‘70s, Mika’s infectious brand of flamboyant pop has struck a cord with a broad audience, including gays. One of his standout tracks is “Billy Brown”, which describes the journey of a married man who discovers that he’s attracted to men.

Much has been written about the way you got your record deal. How did it exactly come about?
It is quite a story. I was studying classical music in London until a year ago. I always knew I wanted to do pop music. So I was sort of living a double life. Studying classical music during the day and writing pop songs in the evening. I sent out a lot of demos but nobody really got into what I wanted to do. The commercial people rejected me and the indie crowd did not accept me either because I was too melody-based. So I continued doing the same thing. I got in touch with some people who were associated with a big label and they wanted me to become somebody I was not. I refused to do that. I ended up going to Miami on a regular basis to work there independently on my music. With borrowed studio time and musicians doing stuff for free, I ended up with a solid demo. In the meantime, the record company that initially dismissed me had completely changed their tone and wanted to sign me.

Is it true you wrote “Grace Kelly” as a response to those label heads that wanted to change you?

Yes. I wrote “Grace Kelly” as a screw-you song to those label people that wanted me to be somebody I was not. But ironically, one year later, it was the song that got me signed!

For people not familiar with your music, how would you describe your sound?

Hyper-real pop.  It has this hyper-reality to it, hence the cartoon title.

Pop has become such a dirty word. How do you do pop differently?
I’m trying to reclaim pop. Television singing contests, like X Factor or American Idol, have introduced a bad side of pop music. Especially in the U.K., pop music has lost its face and the artistry has been forgotten about.

Do you think bands like Scissor Sisters have laid a foundation for you?

I wonder about that. I am a fan of Scissor Sisters and part of what we do comes from the same place. But it is different because I’m a solo artist.

Blogs in particular have championed you in the U.S.. How do you feel about that?

There is no real agenda with online press so blogs tend to be brutally honest. So to get positive reactions from blogs really means a lot to me.

How did the song “Billy Brown” about a gay affair come about?

I was reading about a similar situation in a paper in London. It seemed to have a lot relevance to people and I thought it would make a good theme for a pop song. As soon as I started to play it, people were saying ‘oh this happened to a friend of mine, or this happened to so and so.’ I was surprised nobody had written about it before.

Rumors have been circulating about your own sexuality. Are you gay?

I don’t’ really discuss that. I don’t feel I really need to. My music speaks for itself.
I have total freedom with what I do musically and the way that I live my life. And I feel really comfortable with that.

Are you ready to conquer America?

Breaking into the U.S. market as one lump is a little scary, but nowadays it is not necessary as much because you can do a lot of online stuff.

Do you ever pinch yourself?  It is pretty amazing what’s happening to you.
Totally. It feels like I’m living one of my pop songs. It is like a hyper-reality. [Laughs]

We’ve been able to re-create the energy from the record. It is just a little bit louder and more aggressive.

Time for some fun questions. Do you prefer Kylie or Madonna?

Kylie at the moment. She’s gone through some amazing few months. She’s a magnet.

Do you have any guilty pleasures?

[Laughs]  Where do I start? My music collection from complete trashy pop, the most ridiculous collection of novelty records from Japanese pop to French baby pop.

What can we wake you up for in the middle of the night?

I tend to be a little grumpy if you wake me up when I’m sleeping. There’s not much that will get me up. [Laughs]

Arjan is the author of the music blog Arjan Writes, where you can find new music, free downloads, album reviews, and more artist interviews. Life in Cartoon Motion has its official U.S. release on March 25.