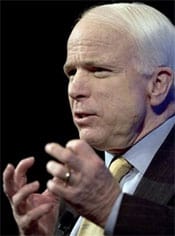 “I recently had a conversation with some other military leaders on this issue and their point to me was ‘It’s working, so leave it alone. Generally, overall, it’s working.’ I don’t think there’s any doubt that there are evolving attitudes in America about many issues, including this one, but every military leader that I talk to, I say ‘Should we change it?’ They say, ‘It’s working.’ And right now we’ve got the best military we’ve ever had – the most professional, best trained, equipped and the bravest. And so I think it’s logical to leave this issue alone. I really do.”

McCain doesn’t name the “military leaders” but he probably isn’t referring to Former General and Chairman of the Joint Chiefs of Staff John Shalikashvili, who came out against the policy in January, or former Secretary of Defense William Cohen, who made a similar statement later that month.

Said Shalikashvili: “I now believe that if gay men and lesbians served openly in the United States military, they would not undermine the efficacy of the armed forces. Our military has been stretched thin by our deployments in the Middle East, and we must welcome the service of any American who is willing and able to do the job.”

In related news, Think Progress reports that retired Army Maj. Gen. Paul Eaton, who was in charge of training the Iraqi military from 2003 to 2004, told Bill Maher that the current administration is “absolutely the worst thing that’s happened” to the U.S. Military:

“We are in the midst of recovering right now from a constitutional crisis where you had the executive trump the other branches of government,” Eaton said. “Thank god” Congress changed hands in November, he said, giving us “a chance to unsort and figure out how to get out from under this.”

Eaton lamented that so many service members believe that conservatives “are good for the military.” “That is rarely the case. And we have got to get a message through to every soldier, every family member, every friend of soldier,” that the Bush administration and its allies in Congress have “absolutely been the worst thing that’s happened to the United States Army and the United States Marine Corps.”

Watch the clip at Think Progress.