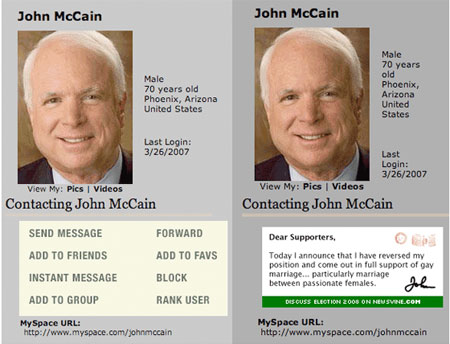 The folks behind John McCain’s MySpace website had their hand virtually slapped for using an image file lifted from someone else’s server this morning when the guy they were lifting it from (Mike Davidson, the CEO of NewsVine) decided to teach them a lesson by replacing the image with an alternative one.

The new image read, “Today I announce that I have reversed my position and come out in full support of gay marriage…particularly marriage between passionate females.”

McCain also supports “Don’t Ask, Don’t Tell” and is not sure if condoms stop the spread of HIV.