As a follow-up to his speech at New York’s Gay & Lesbian Center and last week’s Times Square ACT-UP Army protest, Larry Kramer writes an open letter to heterosexuals in today’s L.A. Times, asking them why many stand silently as the hate parade goes by: 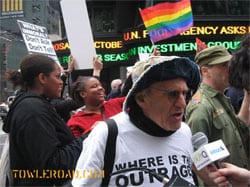 “Gays are hated. Prove me wrong. Your top general just called us immoral. Marine Gen. Peter Pace, chairman of the Joint Chiefs, is in charge of an estimated 65,000 gay and lesbian troops, some fighting for our country in Iraq. A right-wing political commentator, Ann Coulter, gets away with calling a straight presidential candidate a faggot. Even Garrison Keillor, of all people, is making really tacky jokes about gay parents in his column. This, I guess, does not qualify as hate except that it is so distasteful and dumb, often a first step on the way to hate. Sens. Hillary Rodham Clinton and Barack Obama tried to duck the questions that Pace’s bigotry raised, confirming what gay people know: that there is not one candidate running for public office anywhere who dares to come right out, unequivocally, and say decent, supportive things about us.”

And make no mistake, Kramer places much of the blame on gays themselves: “You may say you don’t hate us, but the people you vote for do, so what’s the difference? Our own country’s democratic process declares us to be unequal. Which means, in a democracy, that our enemy is you. You treat us like crumbs. You hate us. And sadly, we let you.”

The L.A. Times identifies Kramer in the tagline to the piece as “an aging 72-year-old gay man (who) isn’t hopeful about the future.”

Whether or not you agree with Kramer’s approach, you would think that the paper could find a bit more respect in its description of the longtime activist. After all, his work with ACT UP was a major force in getting the AIDS epidemic the attention it deserved at crucial moments throughout the crisis. It’s pretty sick that the L.A. Times chooses to write him off as “an aging 72-year-old gay man.”

Would they have had the balls to classify Gloria Steinem as “an aging old woman?”
I think not.

UPDATE: I just received an email from Larry Kramer and he says that he did not write the tagline. Kramer says they also changed the title of the piece, which was originally “A Letter to America’s Heterosexuals”.

And in related news, here’s a new interview with Kramer from Rex Wockner.