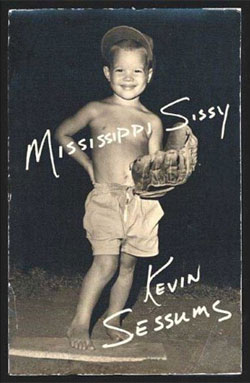 Many of you have probably read a celebrity profile in the pages of Vanity Fair, or perhaps Allure, penned by Kevin Sessums. The broad range of high-profile stars whose lives Sessums plumbed in the pages of VF provided me for many years with an essential page-turning beach read just when I needed it.

Sessums, whom I’ve since come to know as a friend, has just hit the bookstores with something completely different, yet no less a page-turner than his interviews. Mississippi Sissy

is a memoir of his childhood — growing up gay in the deep south in the 60’s in an America churning with civil rights strife and the assassination of a president. Sessums was orphaned with two siblings at the age of eight and his memoir chronicles that loss, along with the awkward journey of a young gay adolescent that might seem achingly familiar to many reading this blog. Yet Sessums’ experience is framed by a disarming wit and the lush and racially-charged backdrop of Forest, Mississippi, where cocktail parties with elder homosexual literati and brief encounters with Eudora Welty provide the route for a young gay man searching for a way out.

Kevin is currently on a book tour. The clip he has been reading, in which his trip to a Halloween party dressed in a witch costume goes terribly wrong, is a vivid firecracker of heartbreaking loneliness and spirited defiance, much like the rest of the book. He agreed to answer a few questions for me, and I urge you to head out and hear him read if you’re on his schedule.

Most people know you from your celebrity interviews with Vanity Fair, and now Allure. What were the challenges in digging in to your own life rather than someone else’s?

Well, I had to push my own buttons instead of someone else’s. Usually when I interview someone I can tell them my deepest, darkest secrets in the hopes it will ignite something within them, inspire them to reveal a bit more about themselves. I can then edit out my own secrets. I couldn’t edit them out when I was telling my own story – and there are some pretty deep and dark secrets I reveal in the book. But I decided when I started writing it that I would be honest and as open as I could be in the hopes that if young gay and lesbian kids out there happened to pick it up they could see that they are not alone in feeling freaked out and freaky – that you can survive those feelings, indeed you can revel in them and turn them into strengths. But I don’t want people to only think of this book as a gay coming of age story; it’s about many things. It’s about race in this country. It’s about maternal love. It’s about all forms of otherness.

MUCH MORE AFTER THE JUMP… 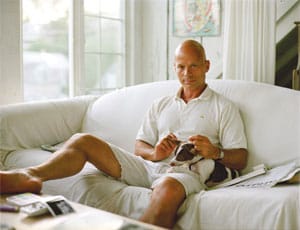 You faced certain unique challenges growing up in the South in the early 60’s. Do you think much has changed? Do you spend much time going back there? Has it changed much for gays in the rural south?

I’m not sure how much it has changed – though my sister, who is a lesbian, and her lover of the last 20 years have a wondeful, full life down there. But an example: I was invited to read at a book store within a department store, Reed’s, in Tupelo, Mississippi. When the owner of the store read the book he had the manager of his book store disinvite me, saying he refused to have me set foot in his establishment.

One of the stories I tell in the narrative is my affair with an all-American African American football player at Mississippi State University when I was 17. He was, in fact, the first black player ever to play at Mississippi State and, according to the owner of the store, a friend of his in high school. It was my portrayal of this player – who ulitmately died of AIDS – that prompted the man to disinvite me and ban me in Tupelo. The only reason he could have been upset is that the one sex scene in the book – there are other scenes of molestation but that is not sex, that is a physical act that is a perversion of trust, not sex – is between the player and me. It broke my heart he had that reaction because I think the portrait of the football player is dignified and loving. But some people in Mississippi – even in the 21st Century – can’t put the words “dignity” and “love” in the same sentence as “homosexual.” I plan to have a t-shirt printed up with BANNED IN TUPELO on it and wear it around the state when I head down there for my readings and signings next week. You can read about my tour schedule on my blog: mississippisissy.com.

Has the book inspired any reaction from folks back in Forest, Mississippi?

Not yet. At least none that I’ve heard about. But people are seeming to react to the book very strongly – either negatively or positively. More of the latter, thank God. But I’ve always had my detractors. I think anyone who dares to have a distinctive voice has those. Thankfully they seem to be in the minority. But I think one needs to have a few virulent detractors as proof you’re doing something right, or at least are edgy and controversial and …. well … worthy on some level.

I think a lot of gay men find that they’re coming out is often facilitated by an older mentor. Journalist Frank Hains, who was murdered, seems to have served that purpose for you. How do you feel that having that mentor helped shape you and how do you think you’d be different now had you not had him in your life?

Frank and his literate, dryly witted coterie in Jackson in the mid 1970s – which included the great American writer Eudora Welty – accepted me into their sphere and proved to me that even if one had the soul of an outsider there are other souls out there who feel the same way – and when a group of talented outsiders get together they usually form the “in crowd.” It was a wondrous social cunundrum I was grateful to learn and served me well when I moved to New York when I was 19.

Sissy is a term that that you were taught to flip around and embrace by your late mother. Today’s derogatory gay currency seems to be mostly centered around the word “faggot”. Do you feel like it’s possible for a similar appropriation to be made with that word?

My mother turned the word “SISSY” around for me by making me write it out for her. She pointed at each letter and said, “See those muscles on those s’s. See the arms on that Y raised in victory. Look at how proud that I is to stand there in front of you. Never let anyone dictate the language of your own life. Be your own word.” It’s a lesson I’ve taken with me throughout my life. But “faggot”? When spouted by someone like Coulter with such spite and venom and condescension, it makes me think that one is hard to appropriate.

I do think maybe all minorities – whatever the degree of their oppression – need a word for them that is unsayable in polite company as a badge of honor. But “sissy” is such an old-fashioned word. There were people who warned me not to put it in my title because so many people would never read – for reasons good and bad and all their own – a book with that word in its title. And maybe it will make it more difficult to sell. But I had to be true to the story I had to tell. Plus, a boy or a man can be a “sissy” and not be gay. There are sissy heterosexuals out there.

The memoir really captures the sort of “otherness” that a gay kid can feel, knowing that somehow, something’s different. What advice might you offer a young gay kid in your situation today – what might the tips be in a Kevin Sessums survival guide? Because the book is very much about survival.

Well, in keeping with the southern tone of my book and speaking figuratively: summon your inner Scarlett O’Hara. Stare at those ugly drapes in your mama’s windows. Tear’em down. Whip yourself up a gown. And go out into the world with your head held high. It’s the only way the Rhetts of the world will give you any respect. They WILL give a damn about you if you are not ashamed to be exactly who you are. Use your otherness to stand out but don’t preen: BE. I went to listen to a lecture by Toni Morrison the other night at the Alliance Francais based on the multidisciplinary art installation she recently curated at the Louvre. The lecture was titled “Art is Otherwise.” She said in the lecture that all the best works of art were about the stranger – that it could be the stranger. It could acknowledge the stranger. It could fear the stranger. When I heard her say that, I thought: that’s sort of what my book is about. My book is about the stranger within us. If you re-order what Morrison said I think the process of gay boys and lesbian girls is that we first fear the stranger within. We then acknowledge that stranger at some point. And then, when we’re strong enough, we can be that stranger, fully and happily and, yes, daringly.

Now that you’ve written the memoir, which ends at your departure from Mississippi, is there any desire to pick up another one where that left off, or write a novel of some sort? And if so, what would it be about?

Well, this memoir leaves off my first afternoon in New York City when I was 19. I’m now 51. Does that mean I can finally have enough distance to write the sequel when I’m 102? Right now I’ve written the first pages of a novel set in Provincetown. It’s a heterosexual, middle-aged love story.

One aspect of the book I’ve also been curious about is its cover. It’s a great shot. Can you tell me the story behind it?

That photo is a cropped portrait of my little brother and me – the publishing house cut him out. I fought to keep him in but they thought a single image was stronger for a memoir. We were at a baseball game watching our father play and afterwards he took that picture of us. Is there any doubt I had to have the word “sissy” in the title when you look at that hand-on-my-hip stance and my little cocked leg there on the pitcher’s mound. You can tell that boy just might want to be a catcher as well. And can’t wait to find out what it’s like to stop posing.