Pope Benedict told Catholic legislators, politicians, and those in positions of power that they have a “grave responsibility before society” to uphold the views of the Catholic Church and defend certain “fundamental values”. 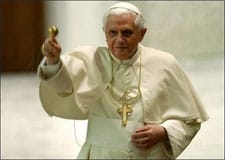 According to Reuters, “he said these [values] included ‘respect for human life, its defense from conception to natural death, the family built on marriage between a man and a woman, the freedom to educate one’s children and the promotion of the common good in all its forms.'”

Said the Pope: “These values are not negotiable.”

The statements were made in a 140-page “booklet” drawn from an assembly of clergy which took place at the Vatican in 2005. In a statement that seemed directed at Italian leaders currently mulling over gay rights legislation, the Pope said Catholic leaders “must feel particularly bound, on the basis of a properly formed conscience, to introduce laws inspired by values grounded in human nature.”