In an interview with Chicago Tribune editors and reporters, Joint Chiefs of Staff chairman General Peter Pace said that homosexuality is immoral and gays should not be allowed to serve openly in the military. 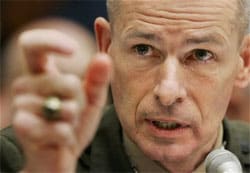 Said Pace: “I believe homosexual acts between two individuals are immoral and that we should not condone immoral acts. I do not believe the United States is well served by a policy that says it is OK to be immoral in any way. As an individual, I would not want [acceptance of gay behavior] to be our policy, just like I would not want it to be our policy that if we were to find out that so-and-so was sleeping with somebody else’s wife, that we would just look the other way, which we do not. We prosecute that kind of immoral behavior.”

Pace said he based his views on his “upbringing”.

C. Dixon Osburn, the executive director of the Servicemen’s Legal Defense Network (SLDN), immediately called on Pace to apologize: “General Pace’s comments are outrageous, insensitive and disrespectful to the 65,000 lesbian and gay troops now serving in our armed forces. Our men and women in uniform make tremendous sacrifices for our country, and deserve General Pace’s praise, not his condemnation. As a Marine and a military leader, General Pace knows that prejudice should not dictate policy. It is inappropriate for the Chairman to condemn those who serve our country because of his own personal bias. He should immediately apologize for his remarks.”

Pace’s remarks directly contradict the views of Former General and Chairman of the Joint Chiefs of Staff John Shalikashvili, who said in January that he believes the military is ready for openly gay servicemen.

Said Shalikashvili: “I now believe that if gay men and lesbians served openly in the United States military, they would not undermine the efficacy of the armed forces. Our military has been stretched thin by our deployments in the Middle East, and we must welcome the service of any American who is willing and able to do the job.”

Shalikashvili did not bring his personal views on what is “moral” into the equation.

AmericaBlog notes: “I’d say ‘immoral’ is letting our own injured and maimed soldiers sleep in their own urine when you all knew about it and didn’t give a damn. Immoral is lying to the American people in order to get us into a war. Immoral is sending hundreds of thousands of US soldiers into battle without the proper armor. Immoral is risking the lives of our soldiers by still not having a plan for victory or exit.”