Brigham young University has made what the Salt Lake Tribune is calling “a small but significant change” to its honor code which one former student and blogger they spoke with says is a reflection of the fact that visibility, awareness, and education are having an impact on tolerance. 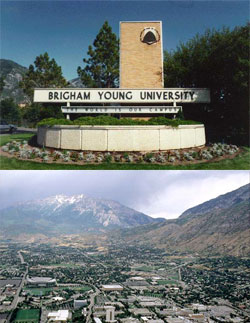 The Tribune reports: “A former BYU student who is now an attorney in Seattle, Nick Literski was among bloggers buzzing about the news. Literski, a gay man who has withdrawn his membership from the church, said his daughter will attend the school this fall. ‘What it’s reflecting is there’s a growing disconnect between church position on homosexuality versus what individual members are coming to see,’ he said in a phone interview. ‘As more and more members of the LDS Church are coming to know individuals who are gay and finding out that they’re human, that these are people just like them, that they’re good people, it becomes difficult for them to demonize homosexuality the way the church positions do.’

The section of the BYU Honor Code in question previously read like this:

“Brigham Young University will respond to student behavior rather than to feelings or orientation. . . . Advocacy of a homosexual lifestyle (whether implied or explicit) or any behaviors that indicate homosexual conduct, including those not sexual in nature, are inappropriate and violate the Honor Code.”

The changes now condemn behavior rather than orientation. Baby steps, but ones that should be noted. One current student told the paper that the changes “remove a lot of the Gestapo atmosphere from the campus.”

Last year, five members of the gay Christian activist group Soulforce were arrested at the University after yelling that the policies of the Church of Latter Day Saints were “killing gays.”