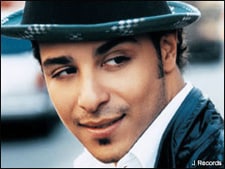 Although he’s embroiled in legal proceedings which claim that he stalked a former Fremantle Media assistant accountant, masturbated in front of him, and then propositioned him for oral sex, former American Idol contestant Mario Vazquez tells Arjan that he’s not gay and claims he left the show for “artistic reasons”.

Says Vazquez: “I’m not gay. But I want people to know I’m very tolerant of [gays]. I grew up with gay people. Growing up in New York City and growing up in the world of arts, it is something that’s there and I don’t even have a second thought about it.”

You may have missed…
Former Idol Contestant Mario Vasquez in Gay Sex Lawsuit [tr]
Ricky Martin: Life is Too Short to be In the Closet [tr]
Former Australian Idol Anthony Callea: “Yes, I am Gay” [tr]